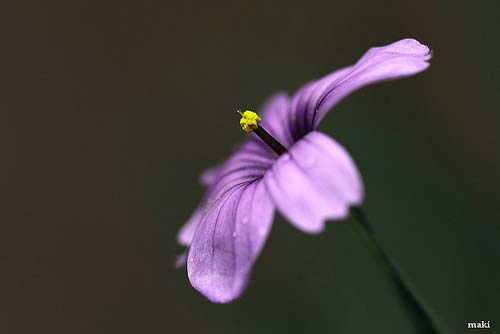 In the case of A Knight's Word, the idea for it came in a dream. The scene where Elizabeth is standing at the top of the snowy tower is actually the setting that came from the dream. Alex, the hero, goes up there to argue with her, she slips on the ice, and he tries to catch her. They fall to the ground, and all of the latent feelings of love and lust boil up through them. That dream was so sharp to me. I could feel the coldness. I could see them fall and their breaths intermingling. I still can.

The rest of the story sort of built up around it. I am very interested in 12th century medieval England, and I am particularly fond of Richard I. I read a story about how much his knights loved him, how they would do anything for him, and how they would rescue him from problems. That was the basis for Elizabeth's brother Thomas's background. The Crusades play a large part in the story, and they are a favorite time period of mine.

Thought! Eager to greatly modify the outdated appearance with my personal page. Views about the overall appearance at http://www.thephoenixdesigngroup.com? Seriously an outstanding interior renovator based in Burlington if seeking in the whole Ontario region. Send a comment. Cheers!

The ending. Well, the ending is one of those things. For me, the ending should have been with Alex leaving the field of battle. However, this is not a romantic ending, and if the happy ending seems tacked on, this is why. I got the inspiration for the grand climactic scene in a most embarrassing fashion. I was thinking about the story, about the motives of Thomas and Alex, and I was sitting on the toilet. It came to me like a flash how I should end it.

For me, the most important part of this story is the idea of honor and loyalty. Some critics have said that a man would not take the abuse from Thomas and that Alex should grow a backbone. I disagree because that is not Alex. Either they didn't understand the character, or, more probably, I did not convey it well enough. This is a man who would die before dishonor, and he feels that declaring his love for his liege lord's sister would be violating that oath. Everything he does, he does for honor, including walking away at the climax.

So, that's where this story came from. It was actually published in 2000 by Kensington Precious Gems Historical romances. It was my first and so far only fiction publish credit. I am immensely proud of it, love the story, and I am glad that I can bring it back as a reprint on Kindle for more medieval romance lovers to enjoy.